I like to work on many different pieces at a time. Like many oil painters i use a layering technique to build up depth and texture. Oil is a slow drying medium and so  it helps to be able to switch between works thus allowing adequate drying time for each individual layer. I also enjoy having some artistic variation- it’s great to take a few days off from a particular piece, work with different colours and techniques on a different piece and then return to the previous work with fresh eyes and new perspective! The pieces show below are at various stages of progression.  Sometimes a piece can take weeks to complete… more often it takes months. A few of them are close to completion now so I thought it would be fun to share the progress with you!

This is a little free hand piece I’m trying out. I took the image as a cell phone snap whilst in Imfolozi game reserve a few months back and despite the fact that I am by no means a photographer I liked the composition and  thought it would be a fun image to experiment with whilst considering trying my hand at landscapes. It has been a quick, enjoyable little study… it’s always fun to paint free hand, I just need to get a move on and finish it now. 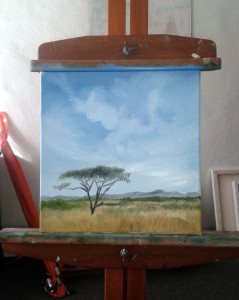 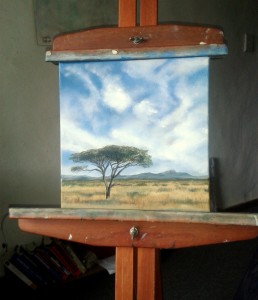 I am having the BEST time working on this piece (original image by Chris Martin Wildlife Photography)- the texture, subtle colours and extremely fine detail are right up my alley. From the subtle blue detail around the eye to the golden sheen on the beak- SUCH FUN!!! I am so excited to finish this work, looking forward to seeing what it will look like framed  for display at the Hilton Arts festival. 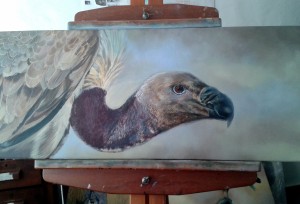 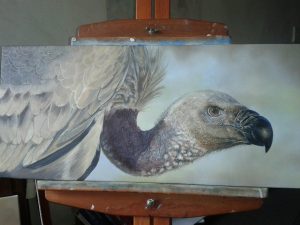 My first “large-scale” attempt at a landscape. Original image once again by Chris Martin Wildlife Photography taken in Sabi Sabi Private Game Reserve. The original image is a stunner, I’m not very far along with this painting but I’m having a blast building up the dramatic cloud detail, the height added by the windmill makes for an interesting scene- another fabulous process to enjoy. 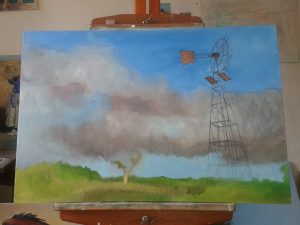 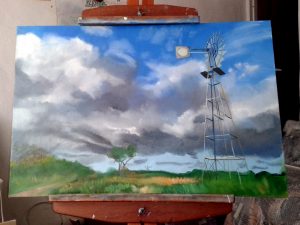 I completed a version of this piece in 2012 and it has definitely been one of my most popular works. I produced a run of limited edition prints which have been popular but I have still received many inquiries from people wishing to purchase the original. The original work became very sentimental to me and I found great difficulty in trying to put a price on it.  I  decided last year that it should be given as a gift to the photographer of the reference image, Dave Salmond, who managed to capture such a beautiful moment, allowing me to produce a piece that created a response positive enough to ultimately encourage me to quit my job in the bush and pursue painting as a full time career . I’m so happy Nonjabulo is now in his home… the best part is that I have visitation rights! With Dave’s permission I have decided to create a second version. No two pieces are ever the same , this version is different in proportion and the colours of her clothing are more vibrant – I have noticed too that more detail has been captured in comparison to the first version. This is also my first time working on polyester as a canvas medium and I must say personally, I’m not really a fan- I find it difficult to create fine brush work as the canvas is very rough and quite dry compared to other materials. Never the less, it’s Nonjab’s huge smile (and those lovely holes in her shoes) that capture people’s attention… it’s been a slow process but I’m getting there… hopefully she’ll be ready in time for Hilton. 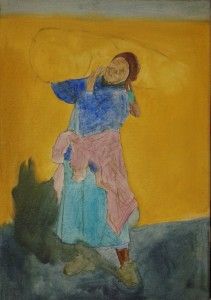 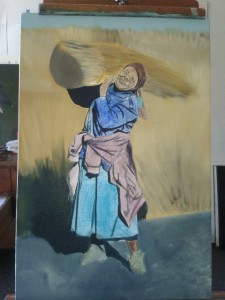 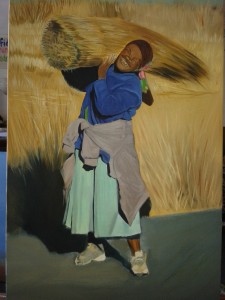 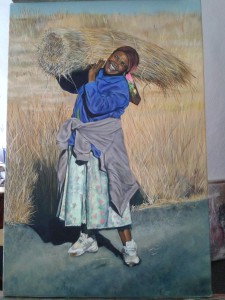 I have painted different versions of this Chris Martin Wildlife photography image before, using the original dark green background which is very effective. This version was a commission request. I have always been curious as to what the eagle would look like against a lighter background. It has been a fun and interesting piece to work on- the green background originally made for fantastic contrast against the white of the head- the lighter background gives a chance for the golden sheen on the wing feathers to stand out. It is definitely a work in progress, once the feather detail is added on the eagle himself I’ll play around with the background and hopefully make the piece pop. I’m excited to see how it turns out. 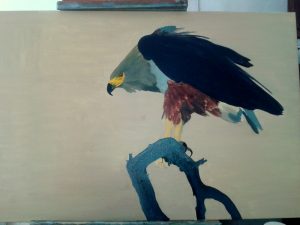 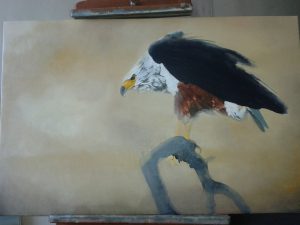 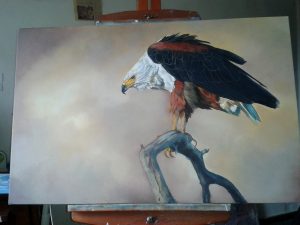