“Wow, you must have a great deal of patience “! That’s probably one of the most common remarks I receive from anyone viewing my artwork. I do enjoy producing finely detailed oil paintings. And yes, it does require a huge amount of focus and attention, fervent dedication to the task at hand. That’s how I manage to sit at the easel, for 80- 90 hours, producing pieces that can at times, take up to 6- 9 months to complete. I suppose, in that respect, I am a ridiculously patient person indeed. If I’m truly passionate about a task, it has my full attention. I’ll see it through to completion. No matter how long it takes.

Something else I’m passionate about… leopard spotting.

It’s early morning. My mom and I are driving along our favourite little river loop in the area. We’re still basking in the glory of yesterday’s lion sighting. Two lionesses on an impala carcass, right at the side of the road. We had the sighting all to ourselves for 40 minutes, before being joined by another vehicle. It’s late summer and the Kruger National Park veld is dressed to kill. Draped thick with electric green textures. Heavily splashed with the soft pinks and sunny yellows of wildflowers. 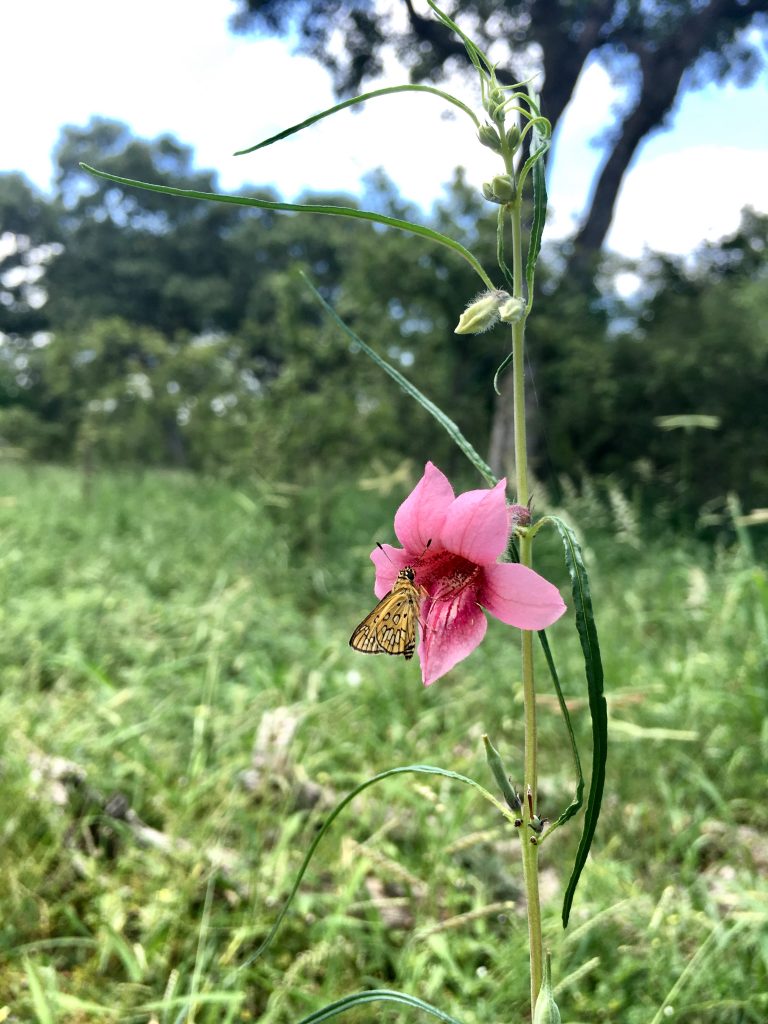 We follow a little two-track pull off which takes us slightly closer to the riverbed below. A prominent Jackalberry tree stands tall on the gentle slope of the river bank. Amidst the dramatic summer foliage, we spot a VERY fresh, only partially eaten carcass. The carcass is of medium size, wedged low down in the fork of the tree trunk. At first glance, in a brief moment of hilarity due to a mixture of excitement from the discovery, and confusion bought about by the weird looking “feet” and light tawny colouration of the victim, we mistakenly think said carcass to be that of an aardvark.

We hastily abandon that theory, deciding the carcass must be that of a young antelope (with hooves that is, not feet). My mom says she saw a female waterbuck looking melancholy and mournful a few meters back. Right, so an unfortunate baby waterbuck must have fallen prey to a cunning leopard. 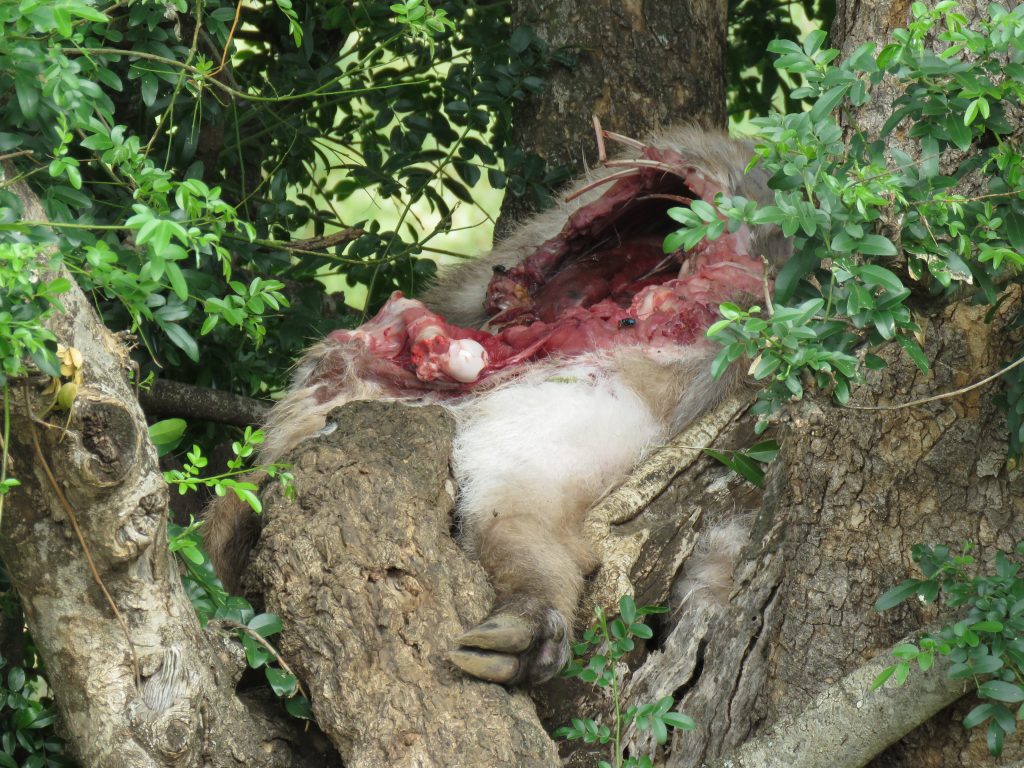 The carcass is SO fresh, and SO exposed too. There is no way this leopard is not coming back. We are waiting right here!

1 hour passes- We can do this all day, we’ve got tea and rusks.

2 hours pass – “Which angle do you think she’ll come from” ?? A tree squirrel is broadcasting its complaints from the low hanging branches of a combretum tree- classic predator give-away- this sounds promising! A car whizzes past on the main stretch of dust road behind us. A few more minutes leak by. “Tisk tisk tisk”, the squirrel is still complaining- still sounding promising. A couple more cars pass. Slower this time, but without stopping to fully investigate our stakeout. shortly after that, a few more cars whizz by in a blur, ‘Ferrari-safari’ mode fully engaged. Be gone with you. The tree squirrel has now taken his complaints elsewhere- less promising. 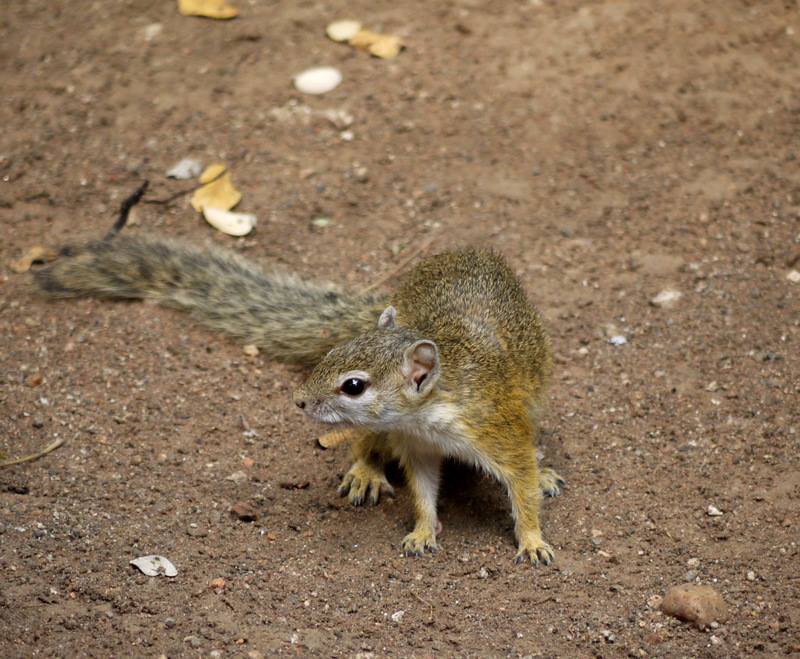 3 hours pass – The tea’s now gone through us, emergency loo break required. Relocate to ‘safer’ and more suitable area and get back on loc ASAP.

3.5 hours pass – There is presently a HUGE storm on the way. The temperature has dropped and the bush has fallen eerily silent. We find ourselves momentarily reveling in the realization that we’ve just discovered the elusive antidote to the seemingly eternal tedium that is the call of the Monotonous Lark (bless its efforts). A mighty wind has picked up. We put the car windows up to avoid certain dust asphyxiation. There is a hugely energetic lightning performance in the distance. The thunder is making a point, dramatically blasting its agenda over the summery landscape below.

A small amount of rain begins to fall. We brace ourselves. Then, in an unforeseen turn of events, the weather has succumbed to the sudden realization that it has urgent business to attend to elsewhere. Either that or it’s just realized that the world’s most intense leopard stakeout is underway. Whatever its reasons, it makes a quick apology with one last burp of thunder and before we’ve had time to respond to its regrets, the sun is out and Monotonous Larks the Kruger Park over have reclaimed their perches… to the woeful acceptance of every ear-owning being that isn’t a Monotonous Lark itself. 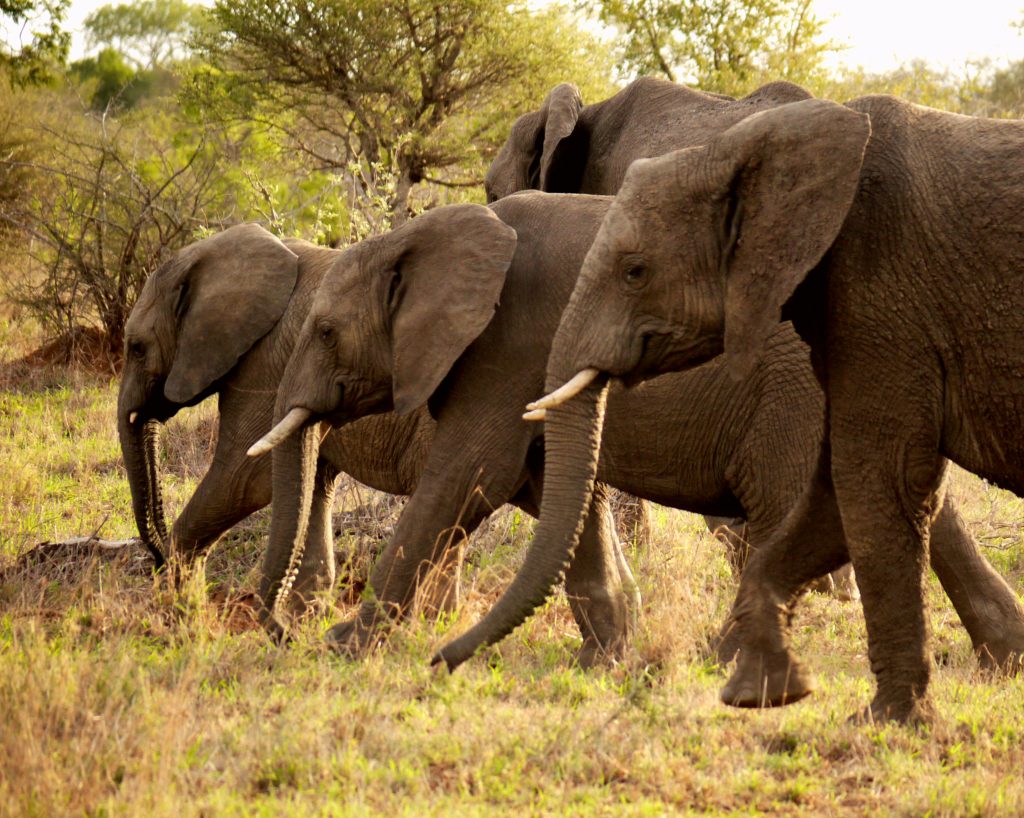 4.15 hours pass – What do we do, what do we dooooo?? Maybe this leopard is waiting for us to leave ??  We think we should leave. We make an executive decision to drive to the sight of yesterday’s lion kill (+- 5km’s down the road). Then, we’ll make our way back to see if there’s any spotty business potting in the jackalberry tree.

In our minds, there are a few ways that this could pan out…

Good scenario 1 – We return to loc and the carcass is gone. Thus concluding that the leopard would never have come out if we had remained there.

Good scenario 2 – The carcass remains untouched. Thus we conclude that the leopard would probably only return much later in the evening. We can feel good about our efforts and know in our heart of hearts that it was never meant to be.

Best scenario – We come back and spotty is on the scene.

Worst case scenario – We come back to a ‘manpile’, to be informed by an excited mob,  “there’s a leopard in the tree with a kill, but you won’t be able to see anything from where you are “.

It’s a risky gamble, one we have to take.

Off we venture. We drive +- half an hour to the sight of yesterday’s lion kill (two lionesses on an impala carcass that we believed at the time to have been scavenged from a leopard). We then turn around and drive half an hour back. On the way back we pass 3 cars, heading from the direction of the waterbuck carcass. They have either driven straight past it. Or maybe it’s been moved.

Approaching loc, agonizing over the possibilities, not to mention all the patience, strategy and SHEER dedication behind all of our efforts.

We putt slowly onto the scene. Fully expecting to see carcass in tree. Scene unchanged.

OH MY GOODNESS!! Scene is very much the opposite of ‘unchanged’! The jackalberry tree is decorated, not only with waterbuck carcass but now with the added finery of leopard feeding from the carcass. Right there in front of us! 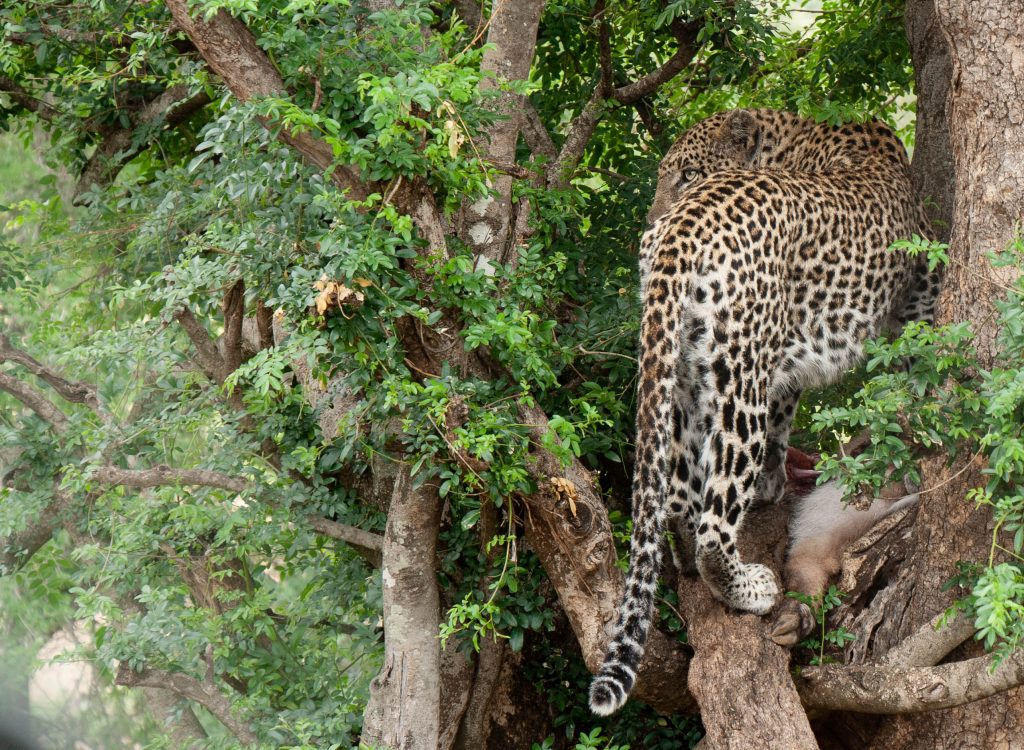 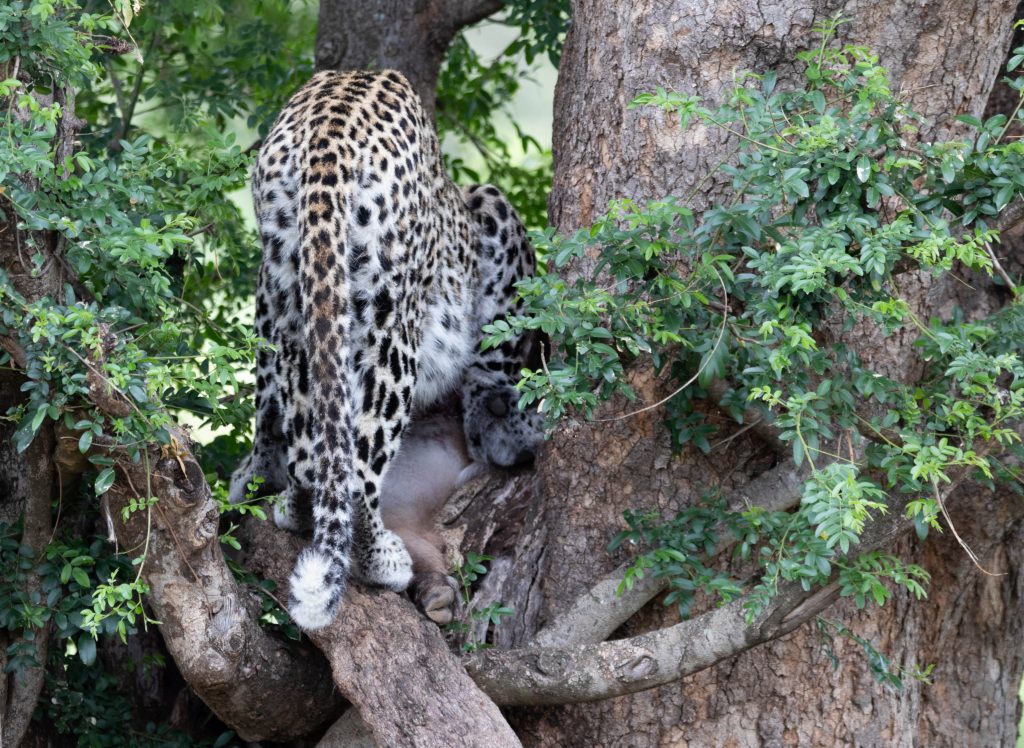 We take some pics quickly before trying to get back to our initial stakeout spot, not 5m from the jackalberry tree. Lady leopard is GORGEOUS, and she seems relaxed. We reposition. Perfect. Argh, once again (as with our last leopard and lion sightings this trip) the cat is too close to fully fit in the frame of my lens. Once again, the kind of problem I’m not fully upset to have. 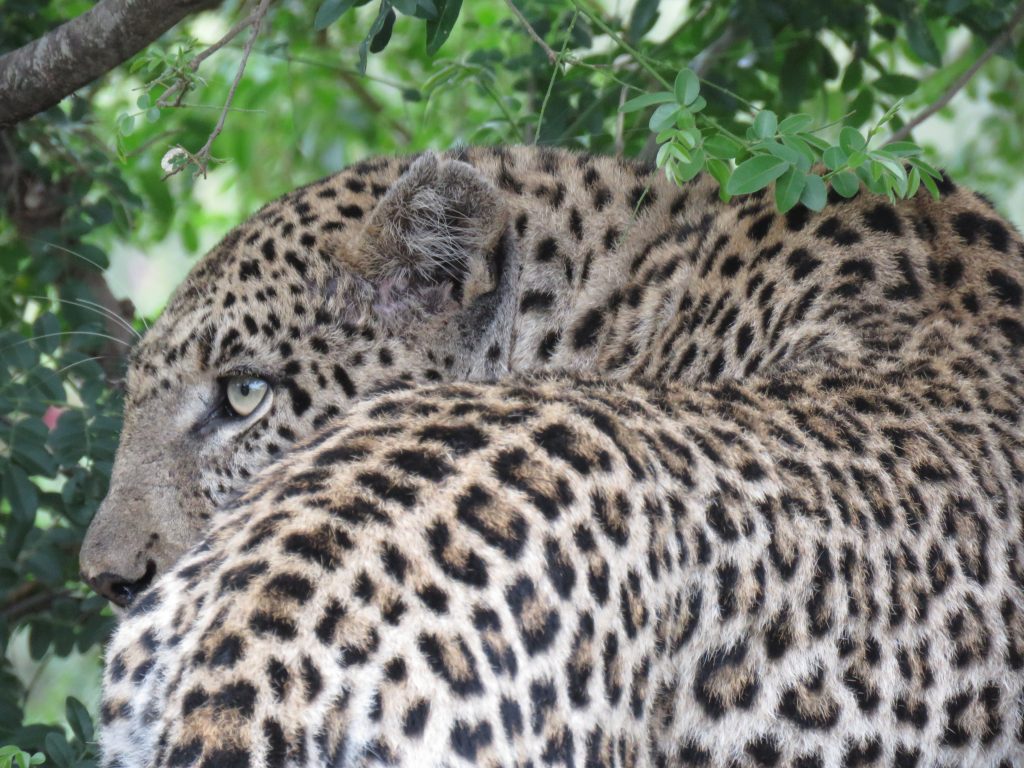 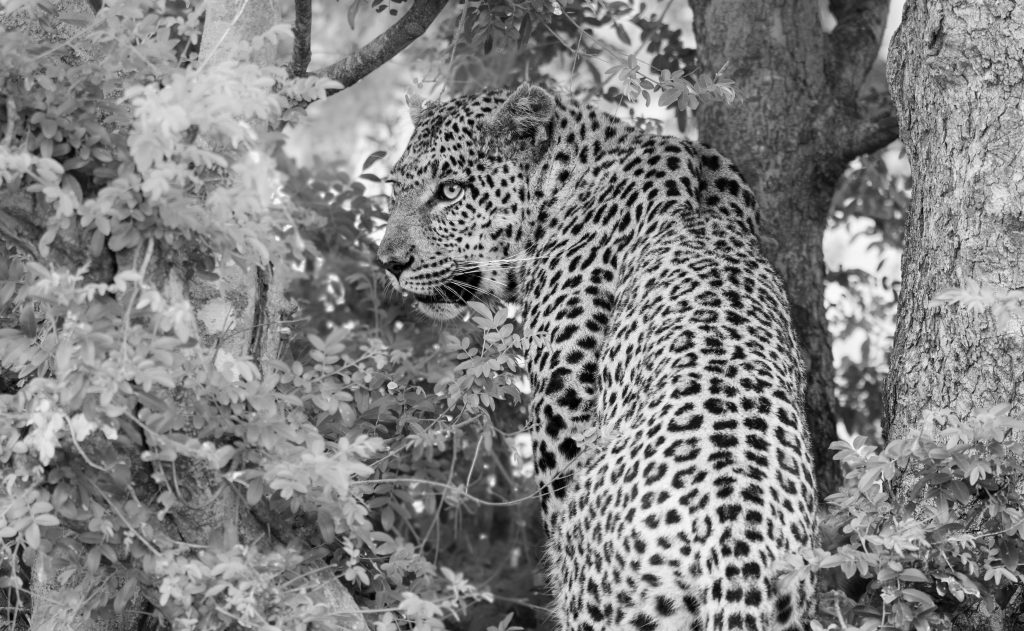 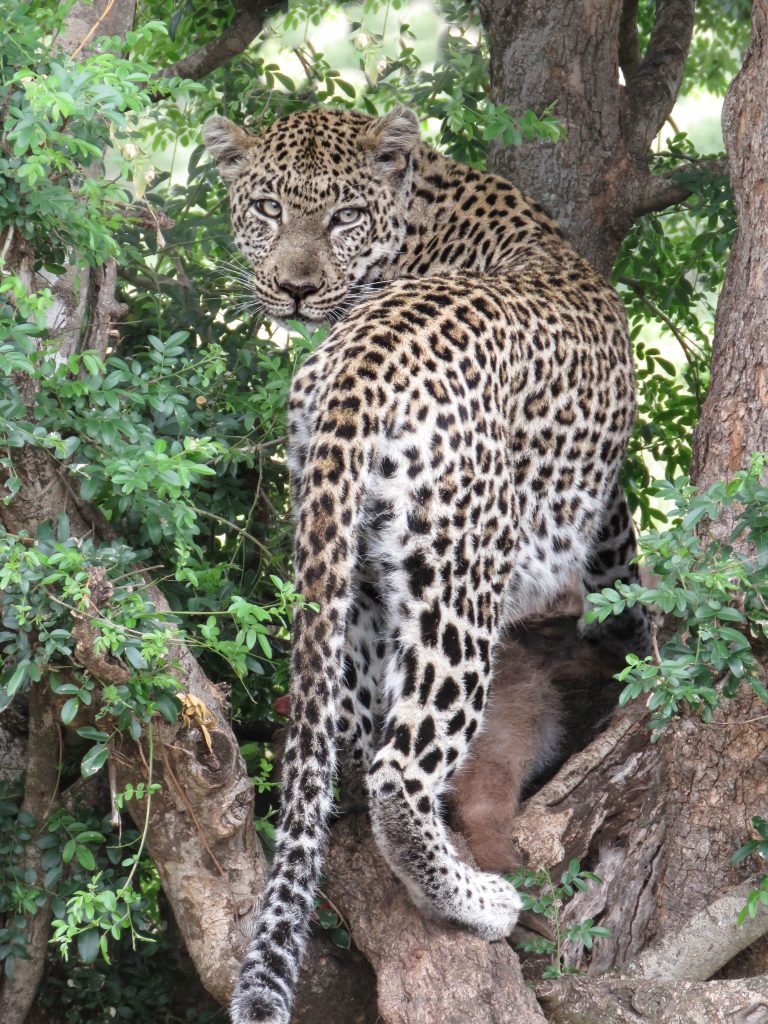 We watch the leopard feeding from the carcass for the next half an hour or so. She is completely relaxed in our presence. Glancing back occasionally, as if to acknowledge our efforts (for which many mental high fives and handshakes are going on, silently between my mom and me).

The poor mother waterbuck stayed around the area the entire day. She could still smell her calf. Even when the leopard was feeding, the cow remained a short distance away, staring in the direction of the jackalberry tree with the occasional grunt of disdain. The leopard ate a fair portion of the calf before climbing down the tree trunk. She looked up at me for a poignant moment before ambling down the bank towards a dense thicket near a small pool of water. That’s where she must have concealed herself all morning long. We stayed there for another hour or so, just in case. Looking at the thicket, it had a perfect little entrance point and I feel, for many reasons that she had cubs in there. But we’ll never know for sure. 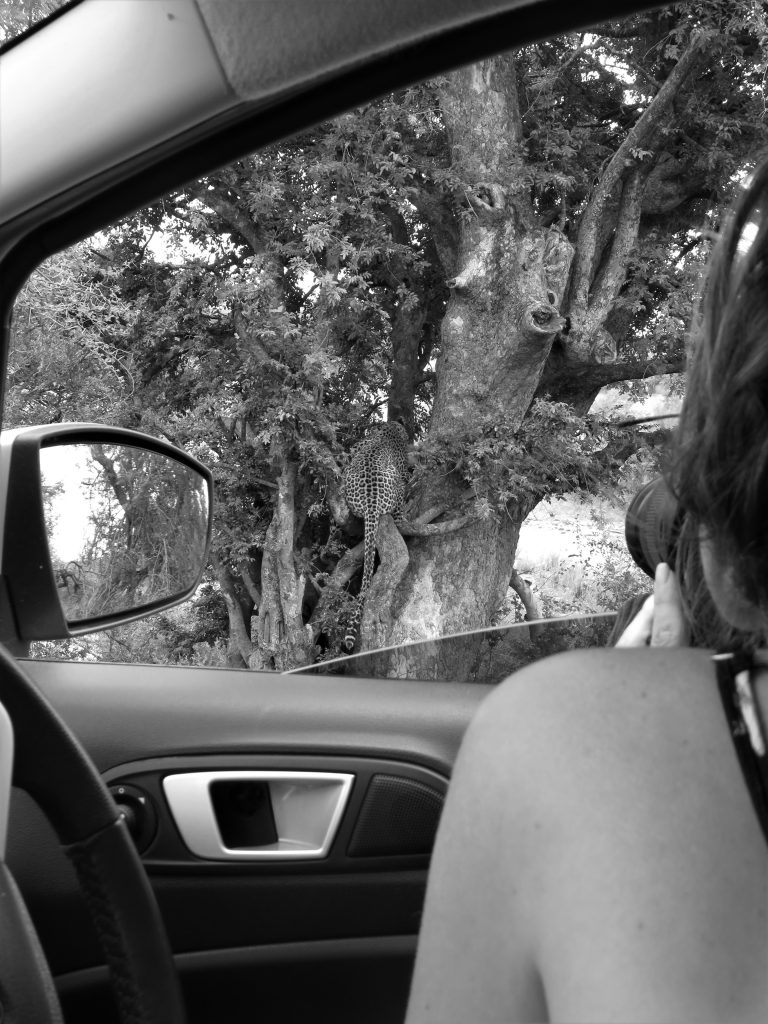 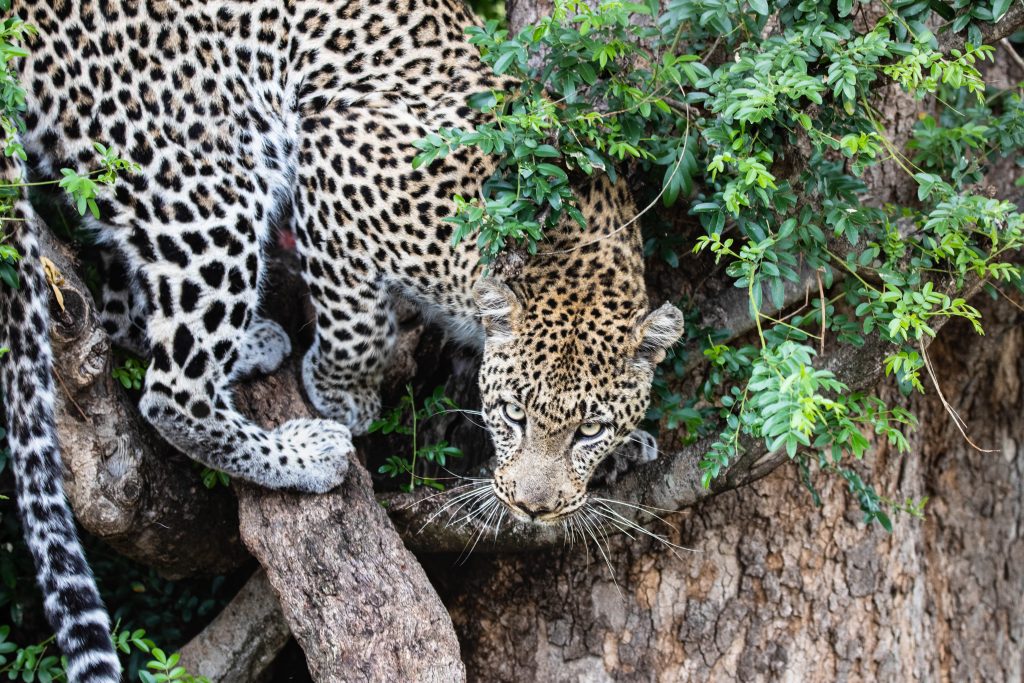 And all of this, once again all to ourselves. What an INCREDIBLE reward, in exchange for an impressive display of patience and dedication. 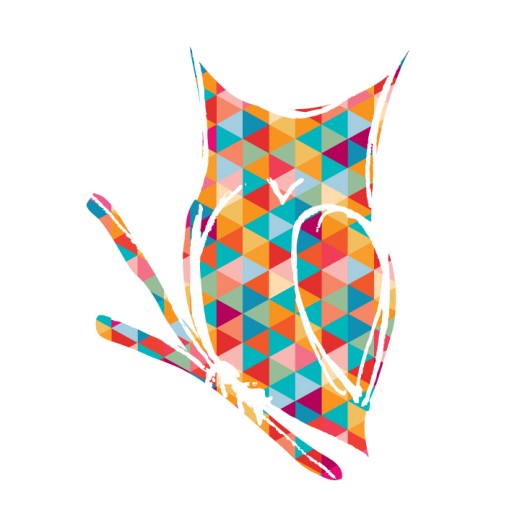