The alternative name of “African Painted dogs” has never been more appropriate!

During a recent Kruger trip we were delighted to come across a large pack wild dogs (+- 18 members).  It was early evening,  the first suggestions of dusk just beginning to bleed softly through the foliage, a typically serene, almost haunting time of the day. The pack however,  had newly bought down an unfortunate Impala Ram and the atmosphere was one of chaos and excitement. We did not witness the initial hunt, and the kill sight itself although not far off the road was veiled  in a cloud of bush debris kicked up by frenzied paws and desperate hooves.  We sat silently, unobtrusively, watching leaves and dust dance about nonchalantly before us in the late afternoon light, a blatant contradiction to the scene concealed beneath their cover.

I’m constantly on the lookout for new reference photos and wild dogs have always been high up on my list of subjects I’d like to include in my painting portfolio.

I did actually attempt a wild dog painting in High school art classes. I’m quite certain that I only ever completed 4 paintings in total (possibly even three) during my entire high school career,  this being an ever so slightly horrendous tally considering that students were required to submit one completed piece per term! With four terms per school year over a duration of three years… well, I wasn’t good at Maths either but even I know that’s a really bad summation- YIKES! However did I graduate?? It’s still a mystery to me!

ANYWAY,  as over complicated and messy as it was, the wild dog painting was one of my favourites. Come to think of it, this particular piece was most likely the work that made me fall in love with oils as a medium. Needless to say I’ve always had a yearning to paint dogs again. 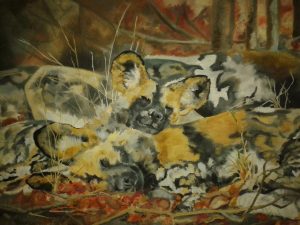 It is an absolute treat to encounter wild dogs in their natural environment, over the years I’ve been extremely lucky with the sightings I’ve had. On a childhood family trip to Kruger we once witnessed a wild dog pup being taken by a croc- quite an awful thing to see in certain respects but also an incredible event to experience and, heart breaking as it was we were very appreciative of the significance, a chilling reminder that Bushveld life is harsh… I can remember sobbing softly in the back of the car!

In those days, we didn’t have a camera and so all of the incredible things we’ve witnessed exist now only in our memories, and that’s perfectly okay.

When visiting wilderness areas nowadays I (like everybody else) try to focus far more attention where my photographic efforts are concerned. My current equipment leaves MUCH to be desired (understatement of note) but I show willing and I have copious amounts of enthusiasm and I think that’s a reasonable place from which to start.

Coming across this particular sighting I did not have high hopes for capturing any photographic magic, the light was extremely poor and the dogs were rushing about like mad things, darting in and out of the shrubbery. I snapped a few shots but soon decided to retire the camera, appreciating the sighting for what it was, letting my photographic memory do the work once again. The few shots I did take were (as expected) rather unimpressive with poor detail and not much else that could be worked into anything too exciting. On closer inspection however, I came to appreciate the way in which the movement and posture of the dogs had been captured in the shots, my photographs, by no personal talent execution, appeared to reflect an accurate representative of the whole scene, in an interesting and unexpected way. I played around with a one of the images, cropping it and such to come up with a frame that I thought would translate well onto canvas.

It is a work in progress… 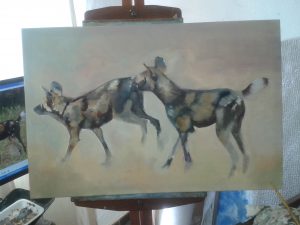 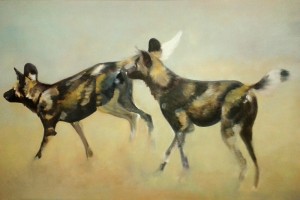 I am so enjoying getting back into my work once again, it’s fun to shift gears sometimes, experimenting with techniques different to my usual style, focusing more on movement rather than detail. It’s wonderful to get in touch with the creative side of my work from a different perspective too by taking an image and then building up my own representation of it on canvas.

It certainly has been an interesting experience and I look forward to continuing my work with this piece over the next few weeks. I have a great deal to learn about this style of painting and that really excited me; that is after all the thing I love most about painting- when there are new things to be learnt and there’s plenty of room for growth and improvement, life is never boring!