Any amount of time spent living and working in the wilderness is bound to bring about an accumulation of highly entertaining and unusual experiences. Each one unforgettable in its own unique way. I love to relive my personal Bushveld adventures; elephants outside the bedroom window, snakes in the kitchen, a Serval in the kitchen sink,  the occasional lioness in your path-  or even something as mundane as a rat in your office…being chased by a Cobra of course!!! There is not a single one of these experiences I would wish to exchange.

Whenever I travel I like to write in my journal.  Documenting my experiences to share with friends and family back home. I had a good chuckle when I came across this story the other day. I thought I might like to share it with you. Not much to do with art in this tale I’m afraid,  but these are the memories that always make me smile. The strange and peculiar events that have molded and shaped me into the ever so slightly strange and peculiar individual that I am today! I hope you enjoy… 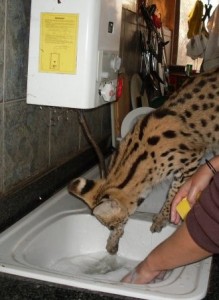 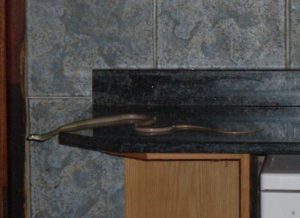 The following event took place about 10 days after I started working at a private game lodge in a big 5 reserve in KZN. I began work on the 23rd April and the managers left to go on leave on the 25th April, leaving a very inexperienced and overwhelmed me to run an extremely busy lodge, with the “assistance” of the lodge maintenance man and a fellow guide. This story is taken from an email sent to friends and family back home.

Let me tell you a tale of the events that unfolded as I was sitting in the office just a short while ago…
Sitting at my desk, busy on the computer, something caught my attention; I looked up to see a large rat running along the wooden beam at the base of the thatched roof. This is not an uncommon occurrence. I often see or hear rats scuttling around up there. It appeared to have something in its mouth but it disappeared very quickly so I didn’t pay it much attention. Next thing it was back again, most definitely with something large (by rat standards) and FURRY in its mouth.

By the third time it repeated this action I feared the worst… You see, early this morning the guests staying in room 1 bought me their cell phone to show me a picture that had been taken of the “thing” that had been discovered in their chalet “swimming in the loo” . On closer inspection I saw that it was a little dormouse (possibly one of the cutest creatures in the world-  with their big, bright eyes, little mousy ears, tiny grey bodies and big fluffy squirrel-like tails). They told me that they had fished it out of the loo and “put it outside to dry”  but that “it didn’t look well, it probably wasn’t going to make it” -not that they were too concerned.
So of course I rushed to its aid. Prepared to administer rodent CPR if necessary, I’m sure. I brought it back to the office. It was very drowsy, soaking wet and freezing cold. I kept it in my hands to warm it up and eventually popped it into my pocket where it soon regained its strength (HOW SWEET). Finally, two tiny pink mousy hands gripped the top end of my pocket and a furry nose with loooooooooonng delicate whiskers peeped over the edge. Because dormice are as cute as can be and are strictly insectivorous I thought it best to release it back into the room (in case it had friends or family that living there) . I decided I’d let it rest in a dark box for the time being and then release it in the evening,  seeing as they are nocturnal creatures. So I put him in a little box with a sign on top that said “DO NOT DISTURB, DORMOUSE AT REST” and left him in the office. 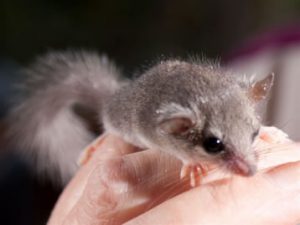 When I came back to check on him (about an hour later)  he was gone. He must have regained his strength and decided to make a move on his own, disappearing somewhere into the office. Let me tell you,  there are MANY, MANY places for things to live in this office. Luckily, room 1 is very close to the office so hopefully he will find his way home and stop trying to drink water from the guest’s toilet!!

But back to the rat… seeing the rat with a furry bundle in its mouth I suddenly feared that the rat had maybe caught the dormouse! I don’t really know precisely how rats work but it seemed like a good probability at the time. If that was not the case I thought that she was perhaps building a nest somewhere and was transporting the building material.
It was only after about her 5th trip that I came to the realisation that she was actually carrying her offspring. Moving them to a new location. I was not aware that rat’s carry their babies, transporting them in the same way that a mother cat would her kittens! I suppose it’s rather logical but I guess I have never really thought about the “preferred rat baby transportation method” before! Hmm!
So, rat actions deciphered I rested on the assumption that she was performing some kind of “spring cleaning” ritual. She was however, rushing back and forth like a maniac,  but rats usually move at a mad speed anyway. So I thought nothing of it.

Now, you need to understand the set-up of this office. As you walk through the doorway you enter our little curio shop section. The curio shop and office are in two separate sections of the building,  divided partially by a wall with a door. There is a large opening in the wall right in front of my desk. With a built in desk. Allowing space for curio shop purchases, bill settling etc and also allowing me visual of guests in the curio shop. So it’s rather…

Sorry, I got called away to go fetch one of our weekly deliveries from the car park, ANYWAY…. back to my rat tale… Sorry, this tale is going to be rather difficult to follow if these interruptions continue!
So, the office is rather open plan, the wall that divides the two sections… INTERRUPTION!!! OH MY WORD… Our maintenance manager came into work this morning and said that he had seen a lioness just below the lodge. We went out to our deck to see if we could get a visual (our deck has the most amazing view of the bush below- we are situated quite high up). Anyway, we eventually spotted them on the road below. THREE lions, one big male and two females. We watched them make their way along the road. We radioed our ranger, who was out with our guests on their morning game drive at the time. Telling him where to find them. He reached their location just a little too late however, as they had already headed off into the bush. I went back to the deck about an hour later and saw them again. What an awesome sighting. JEEPERS, that being said- I will walk around this place a little more cautiously from now on considering that our grounds are not fenced!

SO BACK TO THE DARN RAT!!!
Office divided into two sections, bla, bla,bla… the rat was making its way along the beams just above the door that leads into my office, on the left hand side of where I was sitting at my desk. Running through to the curio shop section along the beams directly across from where I sit.
Suddenly, it was back in my section of the office. To my left. Running at top speed. Then, it instantaneously slammed on rat breaks and took on a very defensive posture. Moving back and forth in a jerky manner. Right then I just knew there HAD to be a snake up there!!!

Before I could entertain the idea further,  a HUGE snake lunged out of the opening between the beams and the thatch roof. With that, the rat launched herself into the air, plummeting towards the office floor. The snake began to follow suit… RIGHT TOWARDS MY DESK! Shrieking something to the effects of “EEEEEEEHHHH”, I desperately tried to plot an escape route. The door was blocked by the “high-speed chase” and, being the “vertically challenged” little thing that I am,  I found myself speed-wondering how quickly I could scramble up through the opening in the wall in front of me! My distress shriek and escape plotting actions in turn scared the living daylights out of the snake, who begrudgingly retreated.  Somewhat. Now seeing that I was “treated” to a worm’s eye view of the snake’s areal performance, I can clearly remember seeing two Rufus coloured markings below the creatures reptilian throat- those characteristic of the Mozambican spitting Cobra (“Mfezi” we call it in Zulu)!!!! JEEZ LOUISE!

I’m not one to be bothered by the presence of snakes. I actually really enjoy seeing them in their natural habitat… but not so much when they’re extremely venomous and careering towards me at high speed in attachkmode. As the gigantic mfezi retreated, I seized the snake free moment and made my escape through the doorway (directly below the snake’s areal ballet performance spot). Bursting out of the office, much to the amusement of the guests who were busy having lunch on the lodge veranda. As well as the kitchen staff who had front row seats to the debacle.

A fair amount of time later, I plucked up the courage to venture back into the office. Most cautiously. I took little tippy-toe steps back to my desk. From there I could see rat mom positioned at the spot where she had moved her rat babies. She was, again, hopping  back and forth in severe agitation. Worst of all,  I could hear the babies squeaking softly in distress. I can only assume that the snake was there, performing with precision,  the natural role which snakes fulfill… vermin control! Rat mom launched backwards at one point; the snake must have lunged at her. She immediately returned to her offspring, hopping back and forth in helpless demonstration. This went on for about half an hour or so. Eventually, the little squeaks subdued. Everything went quiet…
Oh the distress!

The poor rat mom.I could not believe her bravery. The fact that she had tried SO hard to relocate her rat babies to safety. Moving them away from the giant snake that could so easily have consumed her… and in the end her efforts were futile! How sad. I have not seen her again but I hope she made it through the debacle. I don’t really “adore” rats (who does). They’re not on the top of my party invite list or anything. That display however,  was really touching. It really made me see them in a different light. As I said-  I”LL NEVER LOOK AT RATS THE SAME WAY AGAIN!!!

OH THE DRAMA OF THE CIRCLE OF LIFE AS SEEN THROUGH SPENDING A DAY IN MY OFFICE!!! 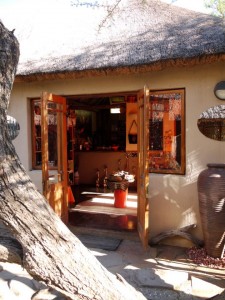