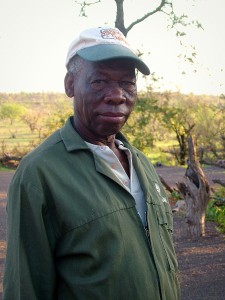 I met Rhampo in 2007 when I went to Botswana to work at a remote little bush lodge in northern Tuli Block.

Rhampo  lived at his cattle post next to the Majale River, and was caretaker of the lodge grounds from 1965 until it was bought by the owners in 1985. Rhampo continued to work at the lodge as grounds manager even after his official retirement in 2000. He was extremely hard working, sweeping the lodge walkways spotless each and every morning, clearing the car park of any Mopani leaf or seed pod that dared gather there in the hours between his attendances.

Rhampo was a kind and patient man.  When the grounds were purchased in 1985 he enthusiastically taught the new owners all the Setswana names of the rivers on the grounds as well as the local history of the area. As an example, the river that runs into the Majale River on the eastern side of the lodge is called the Mataphamahaka, which means ‘the place where the vultures bath’. To this day, at the confluence of the Majale and the Mataphamahaka, the vultures perform their daily bathing ritual.

Rhampo was a true gentleman. He was exceptionally dignified, softly spoken, wise and well respected by those who worked with him, myself included. In fact, when the lodge was built, it was decided to name the bar after him, as a sign of respect. The bar was christened “Sir Williams”.

Rhampo served on the local Kgotla council as well as the Zionist council as a respected Elder, from 2000 to his passing in 2015.

What a privilege it has been to paint his portrait.

William Thipe Pilane will be remembered for his regal bearing, consideration and kindness to every human he came into contact with… an example of how we should live our brief time on earth.